The "State" of Public Records Law: A 50 State Survey 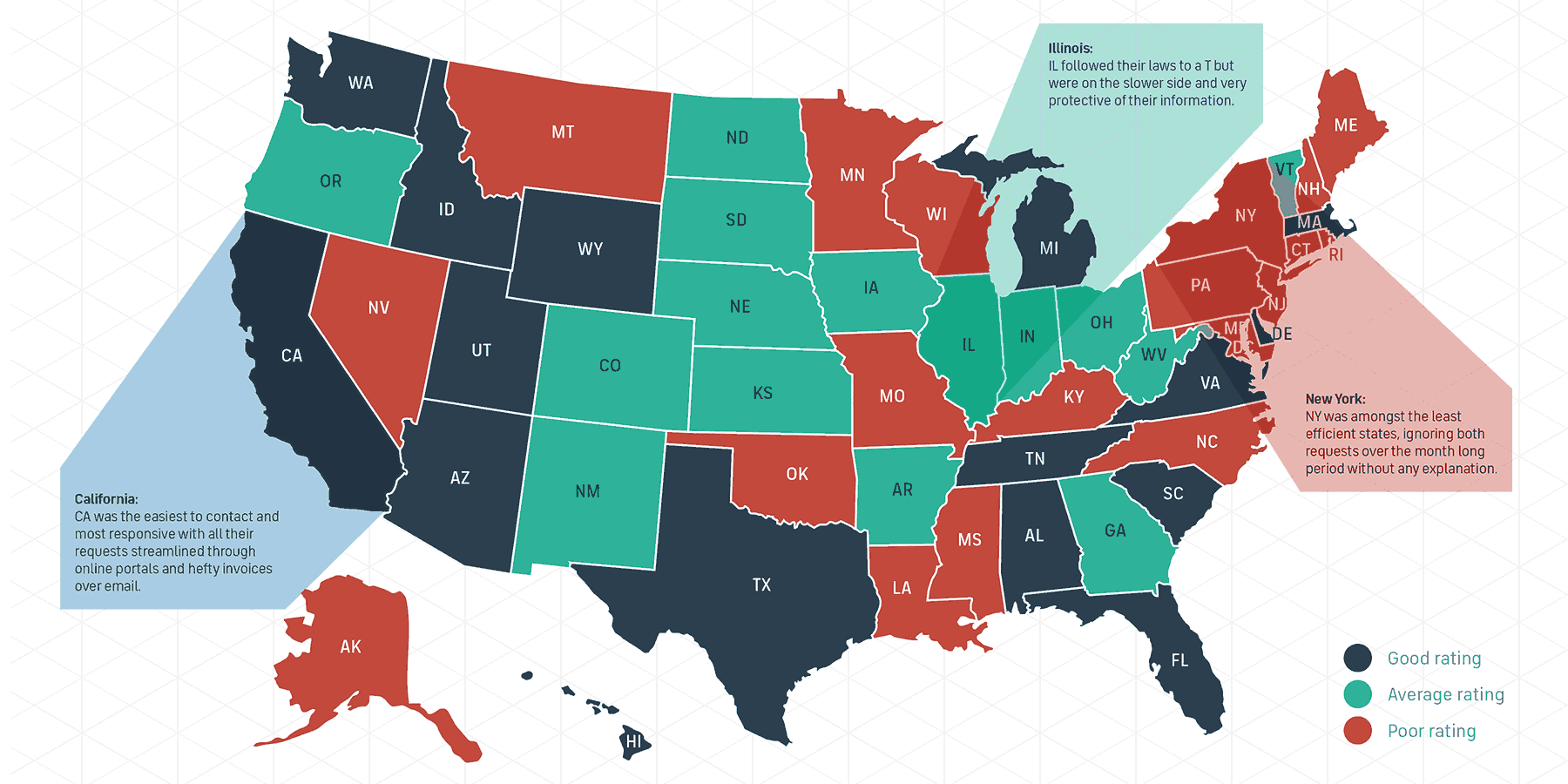 Open records laws like the federal Freedom of Information Act (FOIA) and its state equivalents are essential tools for government transparency. Public advocacy groups, journalists, and private businesses all depend on such "sunshine laws" to peer into the inner workings of governments.

Groups like the Sierra Club have used FOIA to expose corruption at the highest levels of government. Journalists like 3-time Pulitzer Prize winner Eric Lipton, of the New York Times, rely on sunshine laws to break the latest headlines. Businesses and law firms, who make up the majority of open records requesters, use such laws to bring light into government action and decision-making—and often as a supplement to the traditional discovery process.

And though FOIA, the federal open records law, gets the most attention, each state has its own open records act, often relatively similar to the federal version. But that is often where the similarity ends. When it comes to compliance with open records laws, the barriers put up to obstruct requests (or lack thereof), and the general difficulty of making government records public, states vary wildly.

How do we know? We tested them. Over the last several months, Logikcull has requested public records regarding eDiscovery and litigation spend from two state agencies in every state in the Union. More than half of them simply ignored the request. Some, however, made obtaining government information simple and straightforward.

In the infographic below, we map out the findings from our experiment. The results may surprise you.

Why we did this and what it means

Public records laws, or state sunshine laws, are meant to bridge the gap between the government and its citizens. State agencies are required, in the name of the public interest, to release requested information that does not violate personal privacy or reveal matters of privileged security. These systems have become essential tools of government accountability and provide a crucial look into the inner workings of our democracy. To evaluate their effectiveness, Logikcull submitted identical requests to one-hundred state offices, seeking information concerning legal spend from every state’s Office of the Governor and Department of Education. These requests were tracked for over a month and ranked according to their response type, response time, costs, and ease of contact. State open records laws were created to ensure transparency and allow for better communication. This experiment sought to test whether they deliver on that promise.

Background Research: Our first steps include researching FOIA, gathering previous successful examples, and looking into every individual state’s records law to create guidelines for our request.

Draft the Request: Using state open records websites, we composed a template that allows us to plug in state-specific information to create an open records request. Before sending any out, we gathered contact information for each target department as well as ensured that the request hadn’t already been adequately answered.

Send the Request: Two open records requests were sent to each state, one to the Office of the Governor and the other to the state Department of Education. We were in constant communication with several states and made it a priority to respond if they requested fees or required additional information.

Ranking the States: The above infographic represents every state in the Union’s compliance with public records laws, based on findings from this project. Categorization by “good,” “average,” or “poor” give an overarching view of performance, while call-out boxes provide insights on the largest states in the US and provide trends from different parts of the country.

Four factors were used to evaluate state compliance, with states ranked on a one to three scale and their rankings averaged to get an overall level of performance. These were:

Second part of Logikcull's interview with litigator, law professor, and eDiscovery authority, Craig Ball, where we went over the evolving role of eDiscovery experts in an increasingly commoditized industry, Ball’s take on the best approaches to eDiscovery, and present and future industry trends.

InHouse 2021, The Conference for Leaders Who Cull The Noise, Now Available On-Demand

If you missed InHouse 21 or were unable to attend any session, you can now watch them all, on-demand and at your own pace. Watch all ten sessions, and get 7 free CLE credits.

A pending New York law would grant state residents the right to access, delete, and correct data that companies collect on them. And unlike the CCPA before it, this one has bite.